This is how the marble crew from “Llif/Flow” at Pontio Synthesis came to find ourselves reunited in marbles and music in the Lle Celf at Eisteddfod Bodedern 2017. 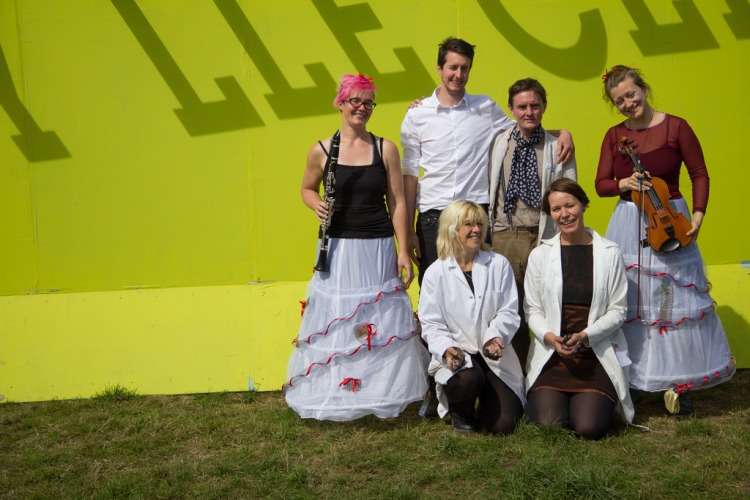 Back in the cold dark days of late winter, early 2017, Lindsey Colbourne, Jonathan Malarkey and I were invited to a meeting at Pontio with Manon Awst, curator of the Arddangosfa Arbenig/Special Exhibition for the National Eisteddfod. We were presented with the opportunity of exhibiting the next incarnation of Llif/Flow as part of her Troelli  exhibition in the Lle Celf when the Eisteddfod comes to Anglesey. There was no hesitation on our part: getting the crew back together, exhibiting at the National Eisteddfod, working with Pontio and being part of Manon’s vision of presenting an alternative view of landscape art, it was too good to miss.

“Here’s an opportunity, says Manon Awst, to gather information and present research by local artists and scientists concerning the landscape of Anglesey which includes paintings, sketches, sculptures, films, performances together with maps, geological samples and plants connected to the island. There is no hierarchy to the different aspects either. By promoting art as a interdisciplinary and collaborative research method the aim is to further discussion concerning how we understand the landscape today.”

The challenge was to create a marble run that would be in a gallery space for 10 days, that had to be robust enough for public interaction,  and that investigated the landscape of Anglesey. Parys Mountain was mentioned more than once, so Lindsey, Rhys Trimble and myself took a road trip out there to see what we might find.

Stunning, mind boggling colours and rock formations. An incredible, overwhelming, otherworldly  place but as always, we were looking for the flow. Is it the veins of copper that flow here? Or is it the lava flow that created it? Or is it that red water?  Lindsey began delving into research and soon found the story, beautifully detailed in her blog “The Strange Case of the Afon Goch Goggledd” 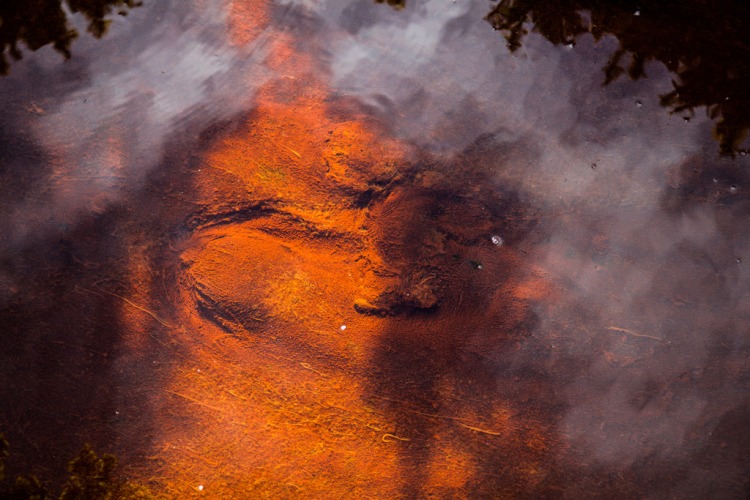 The Marmaladies, Katherine Betteridge and Sioned Eleri Roberts, agreed to join us again, Iolo Price began to make beautiful Parys Marbles for us and, artist and fabricator, Richard Houghton set to work constructing the skeleton of our “Labordy” at The Old Goods Yard Bangor.

Lindsey and I visited beaches along the coast from Mynydd Parys and took plaster and wire casts of the ripple formations there, both tidal and wave formed. 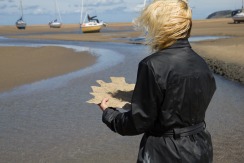 The tower that was our Anglesey Laboratory began to take shape. The restrictions of creating a marble run withing a small self contained space made us work with much more control and precision than our previous free runs, making the collaboration closer than ever. On Saturday. 5th August, Llif Labordy Mon was ready and functioning for the enjoyment of the Eisteddfod audience.

As people began running marbles,  they followed the journey of water through Mynydd Parys, into the caverns beneath, to collect, marble by marble in the sump, ready for the release of the Afon Goggledd Goch during our performance. Lindsey’s video, “Tirlun Llif” played on the wall behind, describing the patterns and processes of flow and copper collection.

On 10th of August, Ocean Scientist Cai Ladd, Rhys Trimble, the Marmaladies, Lindsey and I presented a performance lecture in six parts. Through science, poetry, music, drawing, computer animations and marbles, we considered and explored the Afon Goggledd Goch story, and ultimately, the patterns created by chaotic systems. 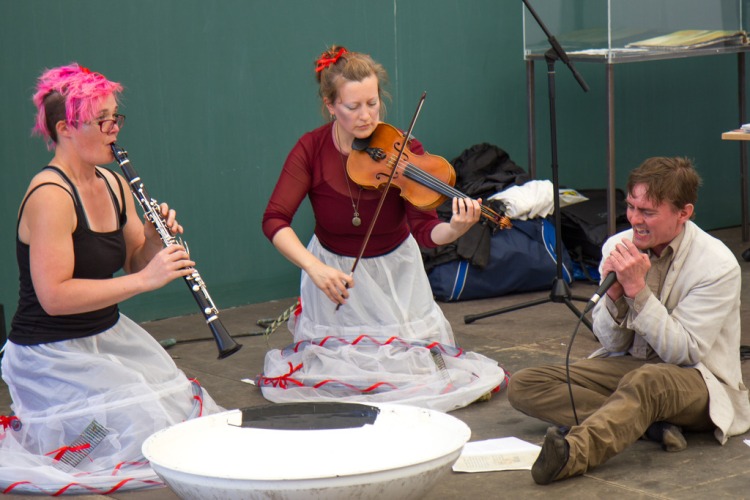 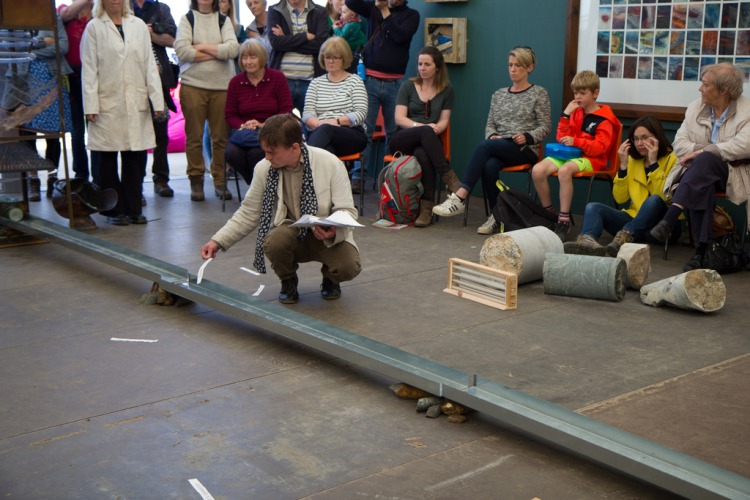 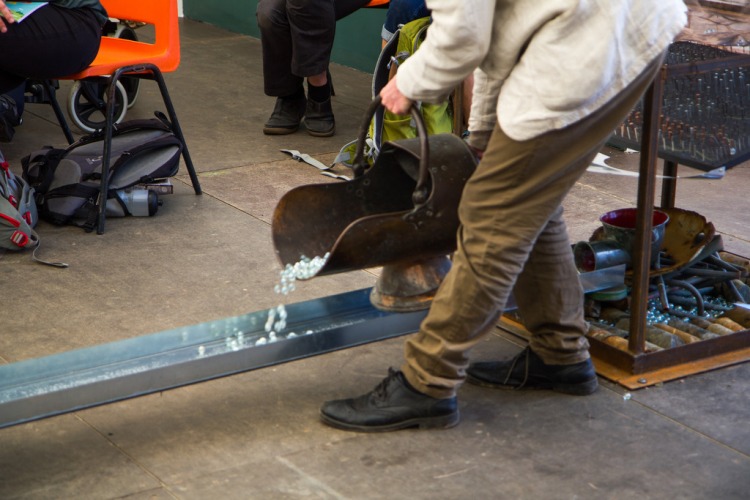 And that’s not the end of the story…. 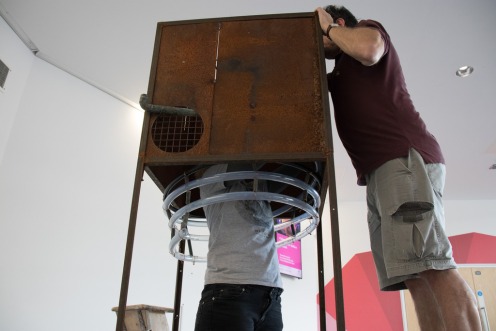 LLIF: LABORDY MON is on show in Pontio Bangor, level 2 until January 2018.

” Homing ” is a group of nine tower-like structures, in mixed media : Specifically bamboo, cotton, wire and wool, as well as found and natural objects.  It is an abstract investigation into the idea of “Home.”

I began this work in response to a call for submissions for a London based project named “Baasher Ghor” ( or Bamboo House ). The call was for artists with a link to Asia, who work with bamboo. As I spent my childhood as an expatriate in Asia, I welcomed the chance to explore this.  I took the title literally, and built a tiny bamboo house, on very long legs, in the hope that it could travel back to Asia some day.

“House” with a background of Snowdonia. 2012

It was through making the original house that I began thinking of House and Home in a more conceptual way, and wondering what “Home” actually means to me, as a near perpetual expatriate.  I realised, as an English person living in North Wales where a strong Welsh identity and language exist, that I am still an expatriate even now.   All of my structures are on long legs, so they can travel.  As I worked, I tried to work with the flow of the bamboo, working with it green to allow it to dictate and change the form as it dried.  The structures are also informed by the many different dwellings and temples that I have visited throughout South East Asia and the Indian Subcontinent. 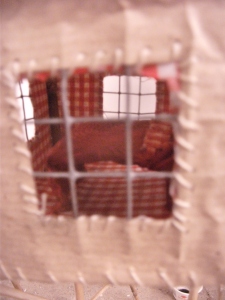