I knew that I wanted to make a dress out of slate right from the very beginning of the R&D process. Textiles are a direct link between myself and my own mother, and then on to my great grandmother, who taught me how to knit and sew, and who had a fantastic biscuit tin full of buttons. Dressmaking is also the skill that brought a lot of young ladies to Bethesda in the boom time of Penrhyn Quarry. When their fortunes took a downturn, these young ladies, now quarrymen’s wives, would take in laundry to try to make ends meet, On a wider reaching and more contemporary scale, women and girls worldwide are still being employed and often exploited by the garment industry. The act of sewing also has a more symbolic association; that of mending and holding together,  a role associated with women in a family setting. I wanted to immerse myself in the material, and be a slate worker myself, in my own way.

My initial experiments focused on ways of holding the slate together, mending a mountain. I wanted to make the slate work as a textile by sewing it together like a patchwork, and also to use the form of the slate as it is found. My first attempt was a breastplate and backplate with shoulder straps, which I wore at the Gwyl Llechi Ffestiniog event. I had attached it with jewellery wire, but it was not up to the task, and snapped repeatedly in many places. I moved on to trying copper wire and fishing line but neither was appropriate.

It became apparent that I was going to need some sort of flexible base to sew onto, but I did not want to make a dress and sew slate onto it. I felt very strongly that the slate had to be the fabric of the piece, not the surface.

In December I had a realisation, while sewing grid s into the Denbigh triptych, that I could construct a thin fabric grid using cotton tape, onto which I should be able to sew raw slates. This should be strong enough to hold the weight, but sparse enough for the slate to be the material of the dress. I got 30m of grey cotton apron tape and 100m of Kevlar thread and began construction. 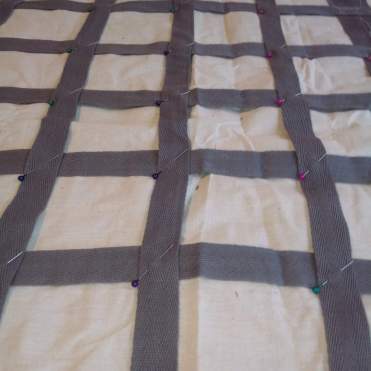 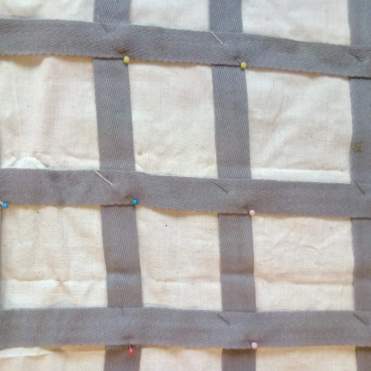 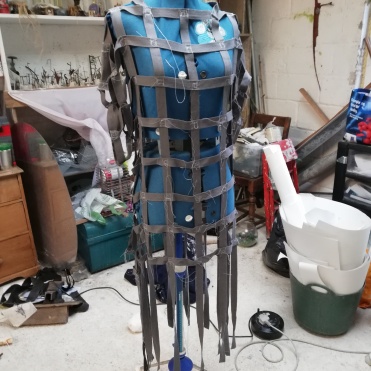 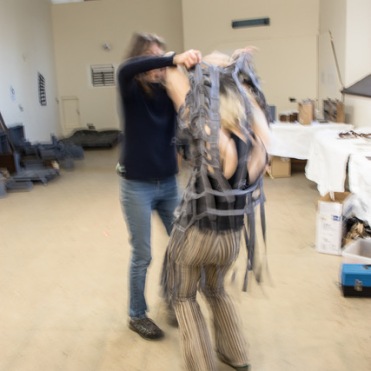 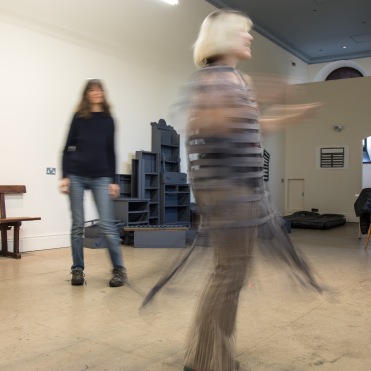 January, Febuary and March were spent in the salubrious surroundings of Penrhyn castle, where I had the luxury of being able to spend as much time as I wanted just sitting and sewing, as the dress began to take shape.I spent at least one day a week heading out to quarries to gather more material, taking it to the studio and drilling it. I worked my way through 32 dremmel bits as the dress progressed. It was slow progress, but I was very happy with how it was working out. 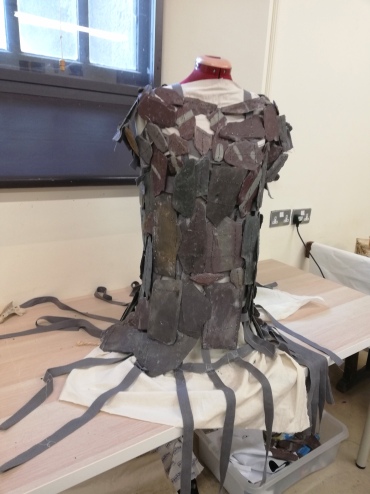 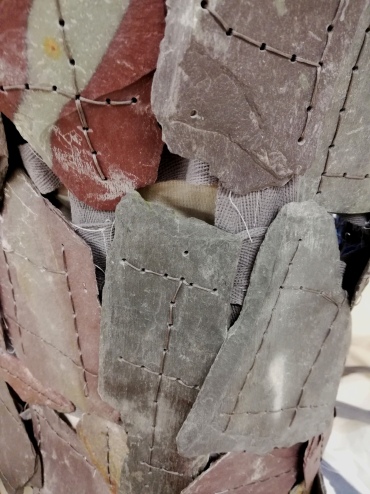 I still needed to devise a way for it to fasten, as it was intended to be worn, so would need to be able to open and close. I wanted to corset the back but found that corseting rough slate was nearly impossible and put too much pull on the tape under-structure. I thought I would experiment with bone and rust, both ubiquitous in the quarries. I found that rust was far too delicate for the job, but that ribbon laced very nicely through a sheep vertebra. In a wonderful cosmic intervention, Lindsey found a whole sheep spine, very clean, in Glyn Rhonwy quarry. I treated it with hydrogen peroxide, separated the vertebrae and it was perfect. 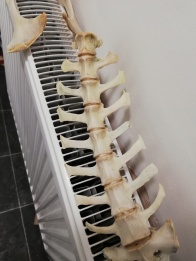 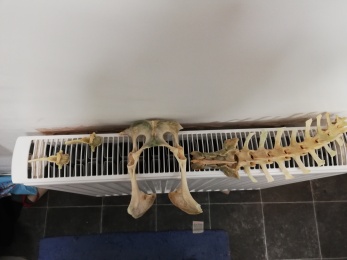 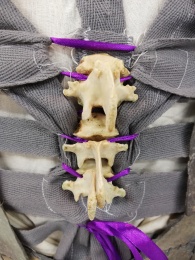 By March, the dress was nearly done. I commissioned a plinth made from weathered steel from the artists and fabricator Richard Houghton. The plinth became the length of the skirt, echoing the rusted machinery and tram cars of the quarries. With all the pieces together, I was happy with the dress as a sculpture. It had come to feel like a natural thing, straight from the slate tips, and I began to think of it as a dress for the goddess of slate, if there was one. I decided to call her Mam Llechi, and the sculpture became “Gwisg Mam” 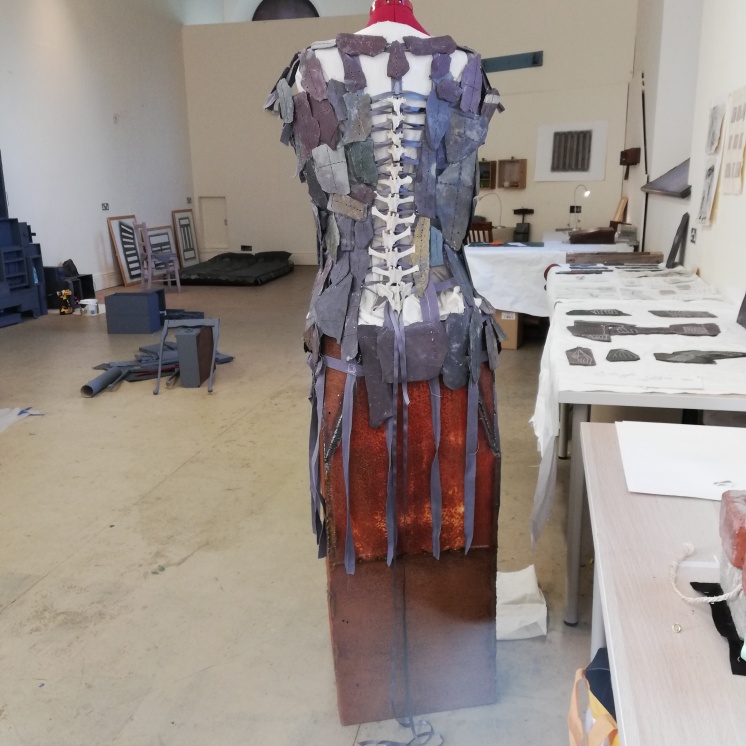 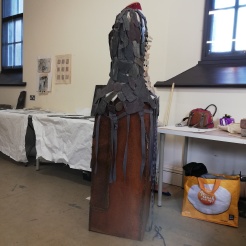 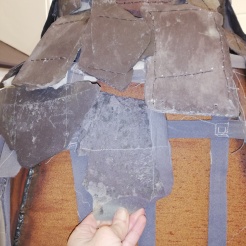 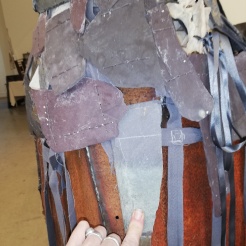 As we were working in Penrhyn Castle, I had been daydreaming about how great it would be to wear the dress inside the castle. It would be a chance to bring the raw and visceral quality of the quarried slate into the grandeur of the house. I tried the dress on one Tuesday, when all the other Merched Chwarel were in, and it was surprisingly easy to wear. Although it is heavy, the tapes distributed the weight very well and it was easy to move in. It is sorter than I wanted, and I realised that any more weight would have to be on a skirt, supported by my hips rather than any more weight being put through my shoulders. Like working the quarry, the dress seemed comfortable and easy at first, but as time passed it felt heavier and heavier, pulling on by shoulders and dragging me down. 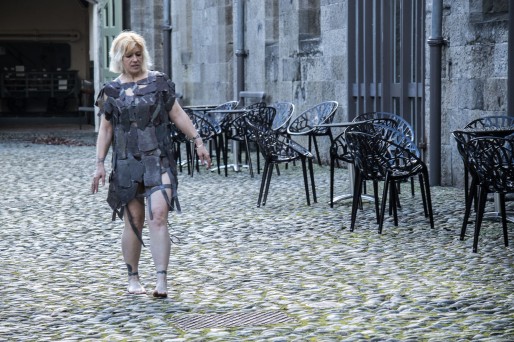 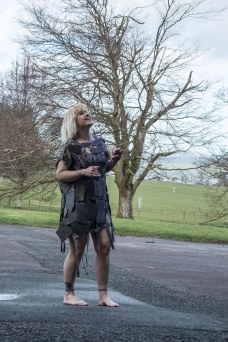 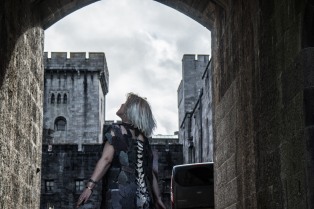 On April 1st, I was given permission to wear the dress inside the castle. It was a fantastic experience. The sound of the dress echoing from the stone walls of the castle was clamorous. I had so many things running through my mind, little actions to try, that I did not manage a cohesive performance but had moments that felt like I had connected, briefly, to something real.  The thread that held it together was The Slate Song/Canu Llechi composed by Sam Frankie Fox 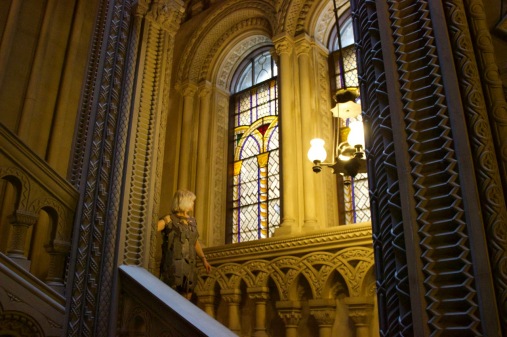 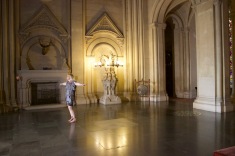 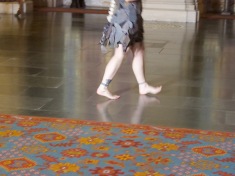 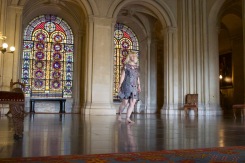 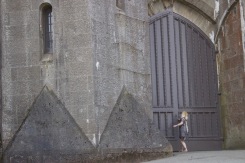 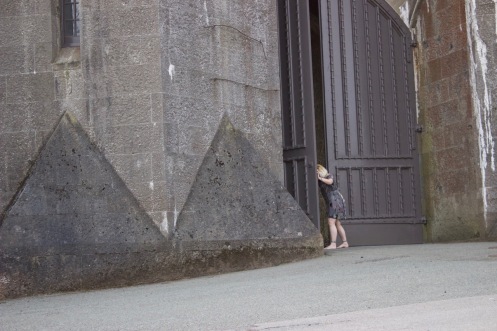 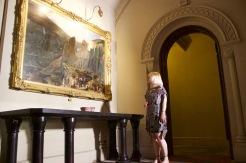 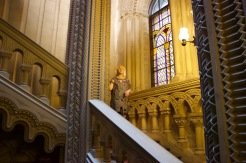 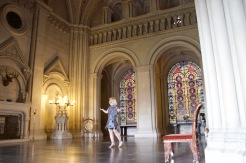 The dress will now be in Storiel until September. From time to time I will be in the gallery, inhabiting the dress, and I have begun gathering material for the skirt. I am still quarrying to find the full meaning of it all.