Firstly, a brief history of how Lindsey Colbourne and I found ourselves working with Pontio and  visiting Dr Jonathan Malarkey’s lab in the School of Ocean Sciences, Bangor University on a sunny Wednesday in April……

Back in June ’15. At a planning meeting for Gwyl Afon Ogwen, Lindsey suggested building a giant marble run from found materials in the woodlands of Bethesda. I thought this sounded like great fun, and Lindsey was happy to let me collaborate. The initial idea was to make something fun and interactive that would give visitors an opportunity to experience the environment in a different way. I don’t think either of us realized how deep it could go at this point.

In the proceeding 4 months we went on a journey of discovery, learning about spin, gravity, chaos, and determinism, and the rules of a functioning system.  Lindsey’s research uncovered a new, debatable, law of physics called “constructal law” that could govern the shape of flow patterns, and we began to use some of these “rules” in our marble construction. The results were “A Crash Course in Constructal Law; experiment a & b” shown as part of the Cylch Cerflyn/Sculpture Circle at Gwyl Afon Ogwen, October 2015. Rhys Trimble and the Marmaladies, Katherine Betteridge and Sioned Eleri Roberts, added a whole new dimension to it all by responding to the run in their stunning improvised performance, subconsciously collaborating with the children pouring marbles down the slate bagatelle style sections. 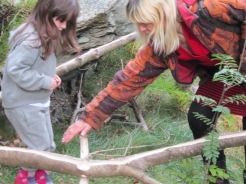 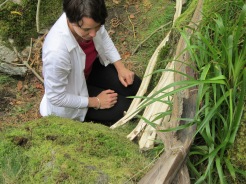 The Gwyl Ogwen day was a revelation. We both knew there was so much more to this, and we were hooked. Building marble runs is compulsive, and we haven’t stopped since…experimenting in Lindseys barn, in TOGYG studio’s, in the woods in Betws y Coed, and even on myself, as part of Mother Island Whispers.  “Sheelah’s Progress” An archeological marble run, is currently on show in The Artfield/Cae Celf in Caim, Anglesey. The marbles became philosophical and metaphorical and the Marblist Manifesto was written. 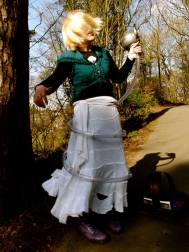 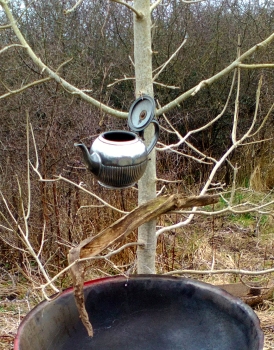 We were both very aware that everything in the movement of our marbles was governed by laws of physics, and we really wanted to learn more of what we were working with. We teamed up with Dr Jonathan Malarkey, a process scientist with an open mind, a fondness for marbles and an incredible knowledge of the laws governing flow and the processes of particle movement. Together we applied to the Pontio Synthesis Project, and this is how Lindsey and I found ourselves in the lab.

It is a common misconception is that science always happens in sterile conditions and with hi-tech precision equipment. Ocean science is sandy and wet and vast. There’s a machine that plunges water, and another pushing water through a thin space. A vast slice of water and sediment stretches across the whole space, past the sacks of sand, piles of bricks and cement mixer (for mixing sediment) The sounds of water are everywhere.

Jonathan patiently showed us everything, and explained the processes we were watching….beautiful terms…laminar flow, settling velocity, shedding vortices, progressive waves…..With a big spanner and keys, Jonathon set the wave machine in motion and created a standing wave. The surface of the water rises and falls rhythmically, going nowhere and reflecting the light like a metal sheet bending back and forth in slow motion, the tiny particles of sand rock back and forth on the pinnacles of sand ripples. I am mesmerized. The wave pattern changes to a progressive wave and the sheet metal water surface changes to a silver ribbon, waving in the breeze. The patterns in the sediment keep changing. Now the little particles move, leaping first forward, then back, but ever so slowly heading for the beach. I found myself emotionally involved with a sand particle, wishing it well on it’s journey.

After a lovely lunch by the sea, we learned about the Von Karman Vortex Street, a phenomenon created by a disruption in the flow that causes a stagnation point at the front of the obstruction and vortices to be shed in the flow behind the object, in an alternating rhythm. If the creation of these vortices reaches a resonance, then it is powerfully destructive. In my mind, I relate this law to other disruptions in the flow….Arguments, illness, depression, financial difficulties. Taking it to the abstract and thinking of the spirals painted on cave walls, carved into clay slopes, and Hogarth’s “Line of Beauty”, the arabesque curve that is seen to be the most pleasing form of all. What is that if not a representation of the vortex form?

I now see these vortices everywhere. I spent a happy half hour watching the Menai Straits flowing around the bridge supports, creating elegant swirls that are there one minute, then gone, dissipated back into the flow. I also searched for them by dropping an inked marble into a glass of water.

I call the result a Three dimensional Live drawing in the medium of ink, marbles and water. There are definitely vortices, but not the Von Karman Street. I think I need a longer glass.